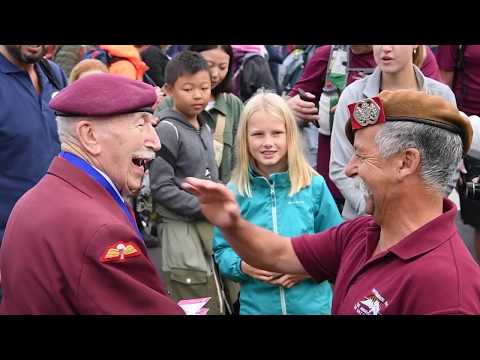 In September 2019, volunteer cabbies from the Taxi Charity escorted a number of veterans to the Netherlands to take part in the Airborne Wandeltocht, a march that takes place every year in remembrance of the Battle of Arnhem in September 1944. It always takes place on the first Saturday in September at Oosterbeek near Arnhem. This year the British Army media team accompanied the cabbies and veterans and filmed this wonderful video. #airbornewandeltocht #arnhem #oosterbeek #ne

100-year-old Ryedale veteran takes to skies in a glider, The Scarborough News

Veteran Ray Whitwell, from Malton, who celebrated his 100th birthday in March, took to the skies in a glider during a visit to Holland. Ray was with the Taxi Charity at Terlet Gliding Club, near Arnhem, to see Fiona Elliot take the ashes of her father Ian Bonner - a glider pilot who was captured at Arnhem - on a final glider flight. When the glider returned, Ray asked if he could take to the skies - and the Dutch gliding team was only too happy to grant his wish. The flight l

Taxi drivers take WWII heroes back to Arnhem, The Badge

On 31st August 7 volunteer cab drivers from the Taxi Charity for Military Veterans boarded the Harwich ferry bound for the Hook of Holland. They were taking Airborne Division survivors back to Arnhem as part of the Dutch people’s annual commemorations. On arrival we were received by the British Ambassador to the Netherlands at his official residence and this set the scene for the whole trip. Wherever we went the veterans were given the warmest possible welcome. That evening w

We recently lost Arnhem veteran Des Page. Kent Online ran an article about his funeral, which was attended by his friend Ian Kerr-Bonner, who flew in by helicopter to say his farewells. #DesPage #IanKerrBonner #Arnhem #GliderPilots #KentOnline

On Friday 1 September 2017, the Taxi Charity took seven Arnhem veterans to the Netherlands to attend the 71st Airborne March, also known as Airborne Wandeltocht. The Airborne Wandeltocht takes place every year on the first Saturday in September. As usual, our veterans were given a heroes' welcome. Some of them were interviewed by Dutch TV channel, Omroep Gelderland. [1:50 mark]. A special thanks to our volunteer taxi drivers. For more photos, please visit our Flickr or Facebo

On Thursday 1 September 2016, the Taxi Charity took five Arnhem veterans to the 70th anniversary of the Airborne March, known locally as Airborne Wandeltocht. The veterans were taken in three taxis from Harwich to the Hook of Holland on Thursday night and arrived in Arnhem/Oosterbeek at midday on Friday. The Airborne March itself took place on Saturday 3 September. The veterans we escorted were: Arthur Letchford, 2 Para - one of the few soldiers to get to the bridge during th

Hello again my taxi troopers, Fast Eddie reporting in with a round-up of what has been happening recently. Please forgive my intermittent reports of late, but I have been on the sick list following a tummy operation. I'm glad to say I am back on parade once more. VJ Day Celebrations - 15 August 2015 Let's kick off with the VJ day celebrations on 15 August 2015. As you hopefully will have seen on the website, in the newspapers and on the tv, everything went off very well. Our

Taxi Charity Vice President, Dick Goodwin, went to Arnhem in Holland at the weekend to represent the charity at the annual remembrance service for Market Garden - the parachute regiment battle that took place in 1944. The main service on Friday Evening, with a march across the bridge at Arnhem, was unfortunately dogged by very heavy rainfall and the parachute drop on Fingle Heath was delayed by fog - but it did eventually take place. In particular, Dick was there to attend

Oranje Comité Heteren have just posted some stunning high resolution photos of our veterans, taken during the recent trip to Arnhem (2 - 6 May 2015). Click here to view the full gallery (approx. 300 photos). #Arnhem #ReturnoftheLiberators

War veteran, Ted Rogers (Merchant Navy), writes about the recent trip to the Netherlands from his perspective... The London Taxi Benevolent Association for War Veterans took 80 war veterans to the Netherlands from the 2nd of May to the 6th. This was the Return of the Liberators of 1945 - the forces which had taken part in the war and as a result the Netherlands was liberated from the scourge of the Nazis. In addition to the veterans, there were about 80 relatives and voluntee

The Taxi Charity's Assistant Secretary and Press Officer, Derek Leone, shares his diary from the recent trip to Arnhem (2 - 6 May 2015). Saturday 2 May 2015 At approx. 5pm, a number of taxis with their veterans began leaving The Union Jack Club in Waterloo for the journey to The Parkeston Railway Club in Harwich, and also to meet up with the rest of the taxis that had picked up their passengers from their homes. During the time at the club, the veterans made use of the bar an

Up and at 'em for a hearty breakfast, we then packed our bags ready for the trip home. We assembled outside the hotel for group photographs of the veterans. The Dutch National Police motorbike outriders arrived to guide us back to the Hook of Holland. We said farewell to our Dutch friends and at 10:30am we loaded up the taxis once more and the convoy hit the road. On arrival at the docks, we boarded the ferry. I think everybody was a little tired - we made ourselves comfortab

Day 4 was supposed to be the highlight of our trip: the liberation day parade in Wageningen. Everyone was looking forward to it. At 9:30am, our small group of the Market Garden Operation veterans set off to Oosterbeek Airborne Memorial for a 10:00am service. Following the service they were to join the main party at Wageningen for the parade at 3:00pm. Following breakfast, as the main party were preparing for the parade, we had disastrous news. Big “G” in his infinite wisdom,
bottom of page