Frank Ashleigh, aged 94, was recently interviewed by Forces Radio about his involvement in Operation Market Garden, when he was the youngest glider pilot at age 19. #FrankAshleigh #ForcesRadio

This September, a fleet of London licenced black cabs will travel to Arnhem with eight Operation Market Garden veterans for Airborne Wandeltocht Every September, the town of Oosterbeek in the Netherlands hosts Airborne Wandeltocht, the largest organised walk in the world, to commemorate WWII’s Operation Market Garden and the route taken by British 1st Airborne Division as they headed towards Arnhem from the drop and landing zones. People head to the town every year to walk th

On Tuesday 26 February, Ian Parsons of the Taxi Charity escorted WWII veteran Frank Ashleigh (Glider Pilot Regiment) to Cranmore School in West Horsley, Surrey, to meet and speak with the children about his wartime experiences and his participation in the Battle of Arnhem. The visit was the idea of teacher-assistant Jane Barkway Harney, who is also chairperson of the Glider Pilot Regiment Society. Frank gave two thirty-minute talks after which the pupils (aged between 10 and 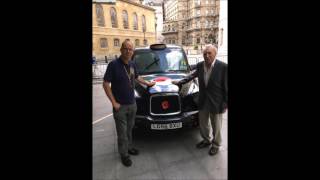 On Sunday 12 February 2017, the Taxi Charity held the official London launch of its #backtothebeaches veterans' trip to Normandy in June 2017. The launch event was held at Wellington Barracks. London Live came along to report. A huge thank you to Taxi Charity Vice Chair, Ian Parsons, veteran Frank Ashleigh and volunteer cabbie Peter Waterfield for being interviewed on the charity's behalf. #BackToTheBeaches #WellingtonBarracks #IanParsons #FrankAshleigh #PeterWaterfield

On Friday 19 June 2015, members of the Taxi Charity committee were invited to a special lunch at the Union Jack Club in London, where they were presented with a shield by The Glider Pilot Regiment Association. The shield was presented to Taxi Charity Chairman, Gary Belsey, by former glider pilot, Frank Ashleigh, as a thank you for taking a number of their veterans on the charity's recent Return of the Liberators trip to The Netherlands, as well as other veterans' outings. In
bottom of page