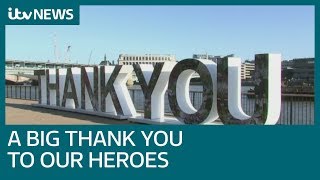 Volunteer cab drivers from the Taxi Charity escorted a number of war veterans to the unveiling of a sculpture that honours First World War heroes. The 'Thank You' sculpture, installed on the Southbank, is to express gratitude to the men and women who served and sacrificed their lives in the First World War, a hundred years on. The giant 50 foot-long structure, outside The Tate Modern, has been unveiled by The Royal British Legion, as part of their #thankyou100 campaign, exact

The Taxi Charity is proud to be supporting fellow charity, Remembered, and its 2018 There But Not There campaign. November 2018 will mark 100 years since the end of World War I. The There But Not There campaign is attempting to capture the indelible imprint of war with art. Life-size sculptures of British First World War soldiers, who were known popularly as 'Tommies', have already been installed in Northern Ireland, London, Wales and Edinburgh. Smaller 10-inch statues are be