On 4 - 8 June 2018, volunteer cabbies from the Taxi Charity escorted 25 WWII veterans on a trip to Normandy. Their busy itinerary was as follows: Monday 4 June 2018 21:30 Arrival at the Brittany Ferries terminal in Ouistreham Tuesday 5 June 2018 11:00 Ceremony at Memorial Pegasus 12:30 Lunch at Restaurant Les 3 Planeurs (The 3 Gliders), just across the Pegasus Bridge 14:00 Shuttle back to the Memorial Pegasus for the 14:30 ceremony with 300 schoolchildren 24:00 Back to th

Press Release: Veterans to visit Normandy to remember the most memorable wartime operation ever plan

The 6th June 1944 is fixed in the memory of WWII veterans as the date of one of the most important wartime operations ever planned and executed. In June this year, twenty-five veterans will be visiting Normandy, courtesy of the Taxi Charity, to remember the part they played and the friends and comrades they lost seventy-four years ago. In the week after their appearance on Britain’s Got Talent supporting The D-Day Darlings on 28 May, an amazing group of nonagenarians will be 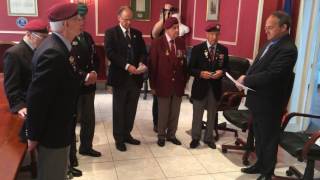 Earlier this week, the Taxi Charity escorted seven war veterans to Normandy for a planning recce for our veterans' trip next June. Whilst there, two of the veterans, Peter Kent and Harry Bailey, received the Légion d'Honneur from the Mayor of Arromanches. Here's a video of the medal ceremony. It's pretty wonderful. #PeterKent #HarryBailey #Légiondhonneur #Arromanches

The Taxi Charity has organised a four day planning trip to Normandy ahead of its veterans' trip next year. From Monday 4 July 2016 to Thursday 7 July 2016, three members of the Taxi Charity committee, along with seven veterans, will be making a tour of the area to recce next June's trip, which will involve some 80 taxis and 130+ veterans. Dick Goodwin, Ian Parsons and Terry Ward (aka Barking Bill) have the pleasure of escorting veterans Geoff Pattinson, Fred Glover, Bill Glad

This weekend, Taxi Charity committee member Dick Goodwin accompanied veteran Peter Kent to Arromanches to visit the Mulberry Harbour and to meet with the Town Council. The Mulberry Harbour at Arromanches was one of two portable harbours towed over to Normandy in sections and assembled around 9 June 1944, just three days after D-Day. The other was at Omaha Beach. These temporary harbours were designed to facilitate the rapid offloading of cargo onto the beaches. Unfortunately